The unit was used on a rental basis by a company sub-contracted to supply concrete, however the rental period was too long to leave one of the Carmix team to operate. So, a new operator was trained to operate the Carmix for the period of hire. With the simplicity of operations training was complete in three days and the new operator was ready to control proceedings on site.

This site was part of the Kronos solar project where the Carmix was making concrete for the foundations of the power pylons leading from the solar field to a sub-station. The foundations where between 15m3 and 45m3 in size with the Carmix 3.5TT producing 30m3 of concrete comfortably within the allowed working hours.

As expected, the Eskom site was highly controlled with regards to concrete quality, health and safety and environmental aspects of operation. Therefore the Carmix unit was under scrutinous eyes to perform, and perform it did!

The Load Cell system fitted on the 3.5TT allowed consistent good quality 25mpa concrete which met the high standards Eskom expected. Additionally, there was one request, from the environmentalist, to cause as little impact as possible on the sensitive fauna and flora found in this region. This restricted the Carmix to use only existing roads and often there was only one access point, through the dense shrubbery, to the foundation. This is where the 300o slewing drum was useful, it allowed the Carmix unit to stand in any position around the foundation and deliver the concrete without disturbing the surrounding vegetation.

In total the Carmix delivered over 700m3 of concrete for the pylon line providing the client with a substantial saving.  This working environment is where Carmix comes into its own. An isolated area where Ready-mix concrete is highly expensive or unavailable. The aggregates are delivered to site by a local supplier and Carmix gets to work supplying concrete on site. A simple, effective option! 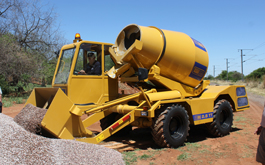 To face of the health and economic emergency connected...

The 2019 edition of Bauma will be an opportunity...

Bauma China is the largest and most important trade...

Reliable, high-performance, unique: Carmix has been the ideal solution for producing high-quality concrete with low costs at sites spread throughout 152 countries for almost 40 years.
Continuous feed-back from the end-users, together with solid expertise, has enabled Carmix to evolve constantly and to develop operating solutions that today act as an example to the building sector and to construction sites worldwide. .